When Your Photoshoot Gets Photobombed With Astonishing Results

A photobomb is defined as a spoil of a photograph. Many people believe that photobombs ruin photographs, but they can sometimes make the photo better. Megan Rion, who is a photographer at Imagine Photography, captures magical movements on camera all the time. She recently captured what many people would consider the perfect photobomb.

Megan was taking a picture of Tiffany Gill-Rogers’ son named Connor. Connor is one month old. The photo shoot was quite a memorable experience. A curious deer saw that the photo shoot was getting ready to take place and decided she was going to investigate.

Connor was being photographed at Sam Houston Jones State Park, which is located in Moss Bluff, Louisiana. Tiffany laid her sleeping baby on a bale of hay prior to the photo shoot. A deer named Maggie decided that she wanted to be a part of the photo also. She wandered onto the scene when Megan was taking the photo of baby Connor. Tiffany captured the moment on video and posted it on YouTube. 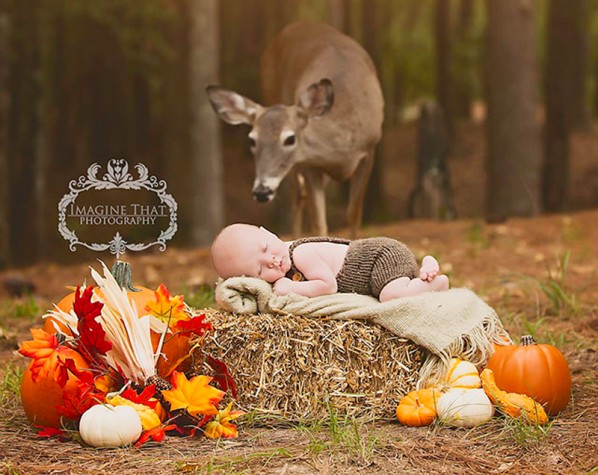 In the video, you can see Maggie walking up to the baby boy. She looks at the boy, and it appears as though she is watching over him while he is sleeping. Megan is happy that she was able to capture such a special moment on camera.

According to Megan, Maggie frequently visits the area during photo shoots. In fact, many people request that Maggie be a part of their photos. However, Megan tells people that she cannot guarantee that Maggie will come out of the woods.

Megan had her assistant with her during the photo shoot. They noticed that Maggie was in the area while they were setting up for the photo shoot. Megan and her assistant waved an ear of corn and were able to get Maggie’s attention. The deer was hungry, and the smell of food attracted her to the area. Megan stated that the reason Maggie was so comfortable with people was because she was hand-fed when she was a baby.

Megan said that when Maggie was a baby, she was rejected by other deer because she had the human scent on her. Maggie is a rescue and was dropped off at the park. She has been hand-fed by humans for many years. 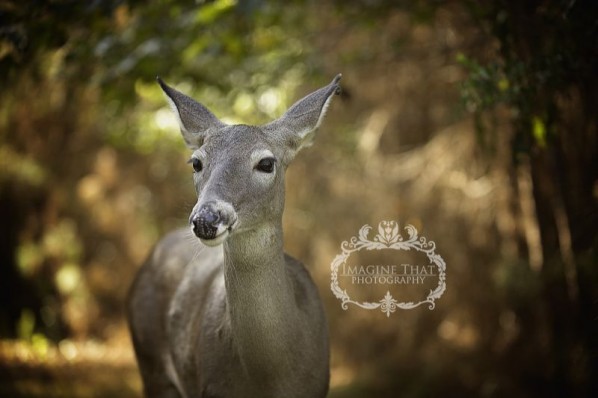 However, Megan said that she exercises caution anytime the deer is near. Even though Maggie is friendly, she is still a wild animal. That is why Megan kept one hand near the baby at all time. Both Megan and Tiffany posted a picture of Connor and Maggie on Facebook. One of Tiffany’s friends commented on the photo saying that she did not believe the picture was real at first.

The man commented saying, “I did not believe that the photo was real until I saw the video. It is a truly magical.” There were numerous other people who commented on the photo and praised Megan for capturing such an amazing moment. One person commented, “Such a beautiful moment. One in a million. So fortunate to have captured a once in a lifetime moment.” Another person commented and said, “The most beautiful photobomb I have ever seen. Stunning!”

The photo has been shared several times on Facebook. Megan started her photography business back in 2008. She stated that Maggie will show up in the area for about five to 15 minutes and then go back into the woods. She also stated that there are other deer in the area, but they will not get as close to people as Maggie will. 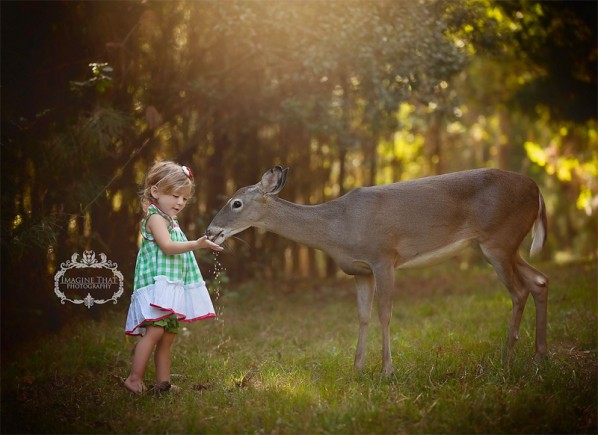 Some people on Facebook have expressed concern about having wild animals around children. However, Megan stated that because she knows Maggie’s history, she feels comfortable having her around children. She believes that Maggie is safe and will not harm anyone.

Megan has referred to Maggie as a being a “Good Sport.” She even has a portfolio on Facebook entitled “Portraits With Appearances By Maggie.” Maggie has helped many people create lasting memories.