Taking Photos in the Snow

The magical snowy days of winter lure the photographer outside to glittering city streets, snow shrouded fields and jolly scenes of children at play…….”you get the idea!”

Get the best snow photos by following a few tips to keep your shots bright and clear in the lovely but tricky light of winter’s wonderland. 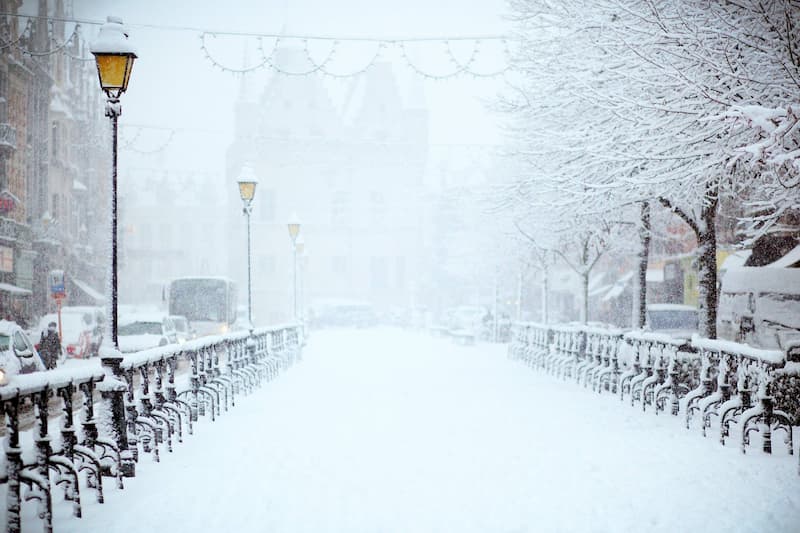 Photography Tips in the Snow

Snow tends to trick your light meter. All that mass of blazing, reflective white confuses the camera and can lead to under-exposed shots with grey, muddy-looking snow. To compensate, try taking a meter reading off a mid-toned object such as a building or face. Many cameras now have an automatic snow or beach scene setting that makes shooting in the snow a breeze, or you may also set the “exposure compensation” control to +1, thus overexposing the scene by one stop. Even if this causes a bit of overexposure, that may add to the atmospheric look and keep everything from appearing too grey. Use of a lens hood will minimise the hazy look caused by flare off the snow.

Light is all-important for taking good, effective photos in the snow. For the best shots, aim for capturing the warmer, golden light of early morning or late afternoon; this will eliminate the tendency of snow to appear blue in photos, and shadows will lend more texture and depth to your pictures. Morning snow has the added benefit of a pristine, untouched look and colours will be truer. For shots during mid-day, adjusting the camera’s white balance to the “shade” setting will warm up the snows appearance. Never shoot directly into the sun; if you must, use a fill-in flash.

Point of View and Motion

By changing your camera’s point of view, you can achieve some very interesting shots. Bring a waterproof drop-cloth and get down on the ground for some very interesting shots from the ground up. That jolly snowman can look huge and powerful from below, and snowball fights take on an extra charge. Get up high and use a wide-angle zoom setting to add a professional look that takes in more of the snowy landscape. Use your cameras “action” setting or a higher shutter speed to capture fast actions shots of skiers or skaters; the plentiful light created by the snow makes it easy to use the high shutter speeds needed for a crisp action shot. “Pre-focus”, or lock the focus, in path of someone on the go and then press the shutter just as they reach the spot, effectively freezing them in action.

Though most often associated with cheery scenes of playing children and peaceful landscapes, use of different angles, times of day and points of view can result in some intriguing photos. Try shooting stark white skies and snow-shrouded objects in black and white for an otherworldly, eerie look, or make use of the long, dramatic shadows cast across the snow in winters low light to lead the viewer into a powerful image. Photographing scenes at dusk and early evening can lend an intriguing, menacing look by providing a vivid contrast between the light of the snow and the dark of surrounding objects. Varying shutter speed can also be used to creative effect; achieve a painterly, streaky effect by using a tripod and slow shutter speed of perhaps 1/15th of a second, a bit faster if wind is strong.

Used properly, colour can provide a super pop to your shot, with the careful use of red a popular choice. Colourful scarves and jackets lend a jolly red or green spark to an all-white scene. Once a storm is passed, the brilliant blue of the sky adds a vibrant back drop to the scene, and sunset can lend a truly enchanting element. Your camera will automatically adjust for white balance (AWB) and you may need to adjust for this if your photos are too blue. Manual white balance can be adjusted by dialling down for a bluer look and up for a warmer or more yellow appearance.

Dress warmly, wear layers of clothes with a waterproof outer layer and keep hands warm but mobile by using “shooting gloves”, a combination of finger-less gloves and mittens. Cold and condensation can cause problems for your camera, so stash your camera in a bag or pocket to prevent damage from cold or precipitation. At the end of the day, allow your camera to dry gradually by putting a Ziploc bag while still outside and then bring indoors and let warm gradually, thus minimising condensation. Batteries won’t last as long, so be sure they’re fully charged beforehand and bring along a spare if need be. Depending on where you live, snow may not last too long.

So, bundle up, charge up your kit, and get out there to capture winter’s fleeting magic.