If you enjoy fashion and the royal family, you are about to be richly rewarded with the June issue of British Vogue. Here they will find pages dedicated to the Duchess of Cambridge and her unique style, as photographed by noted fashion photographer Josh Olins. This lucky British photographer can now boast of taking the first ever Vogue cover shot of the Duchess of Cambridge, along with seven original photographs within the magazine. The complete set of images appear in the June issue of British Vogue that went on sale May 5th. 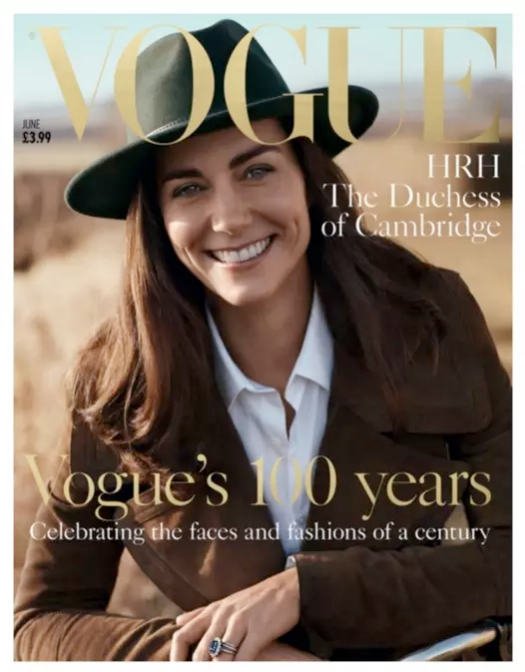 Captured outdoors in the picturesque countryside of Norfolk, the photographs feature Kate Middleton enjoying her natural surroundings. Norfolk was chosen for its location bordering Cambridgeshire and Suffolk, just to the north east of London. Unlike more traditional forms of portraiture, the Duchess appears completely comfortable and relaxed in every photographic image. The photo series allows the reader a peek into the lush landscape where Kate now resides with Prince William Duke of Cambridge and their young family.

At 34 the Duchess of Cambridge is seen as a young mother and international fashion icon, as well as a very popular member of the British royal family. With this in mind, it is not hard to compare Kate’s image with that of her late mother-in-law Princess Diana who graced the cover of British Vogue a total of four times. To commemorate her continued appeal and beloved status, a portrait of Princess Diana taken by Patrick Demarchelier for Vogue in 1997 is to be included in this National Portrait Gallery exhibition.

Josh Olins was chosen by both British Vogue and Kensington Palace, especially for this occasion. At 35, he has already established himself in the world of high fashion photography with his previous work for such magazines as Interview, the Wall Street Journal and Vogue. Prior to photographing a member of the British royal family, Olins photographed fashion spreads with top actresses such as Emma Watson and Julia Roberts. 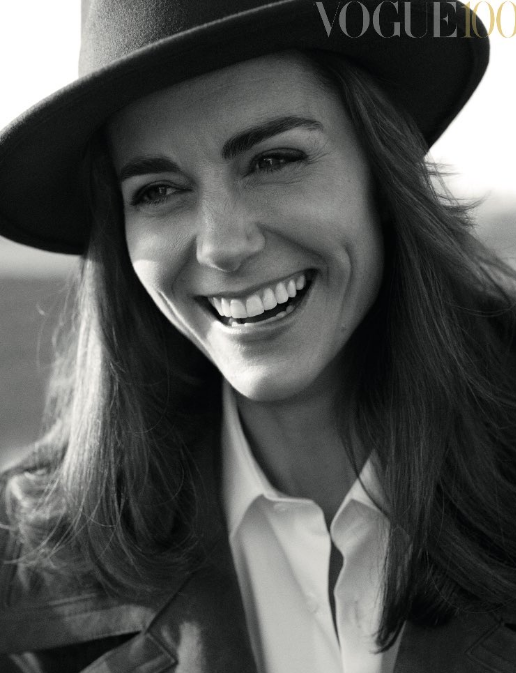 Kate is a photographer herself, and wasted no time asking questions during the photo shoot. She is said to have talked to Josh about working in outdoor locales, and regarding the composition of shots accomplished with only available sources of light. At her suggestion, one photo in particular (where she is pictured at a gate in front of a stone wall) features the golden sunlight of late afternoon.

In the end, it was the Duchess of Cambridge and her own relaxed attitude that set the pace for the day. Kate arrived clad in a pair of jeans, a warm parka and her long hair set in rollers. For the shoot, Senior Director of Fashion for British Vogue Lucinda Chambers brought a wide range of clothing for the Duchess to choose from. Although she was free to pick her absolute best from over ten suitcases and multiple racks of assembled outfits, ultimately Kate instructed Ms. Chambers to go with her own professional instincts.

However, it is the intrinsic grace and charm of Kate that comes through it all. As styled by Lucinda Chambers for British Vogue, the photographic series features the Duchess completely at ease in front of the camera. She smiles confidentially, wearing little make-up to enhance her own radiant beauty. It also appears that the photographs were barely retouched, only adding to the impressive photogenic presence of the Duchess herself.

The make-up used on the Duchess is as close to invisible as one can get with the use of cosmetics. Amazingly fresh and applied with a simple touch by Make-up Artist Sally Branka, Kate’s eyes have been lined lightly with a shade of medium brown colour eye liner. Taking the place of an opaque lipstick, the Duchess wears an almost sheer lip stain in a warm hue of mauve. 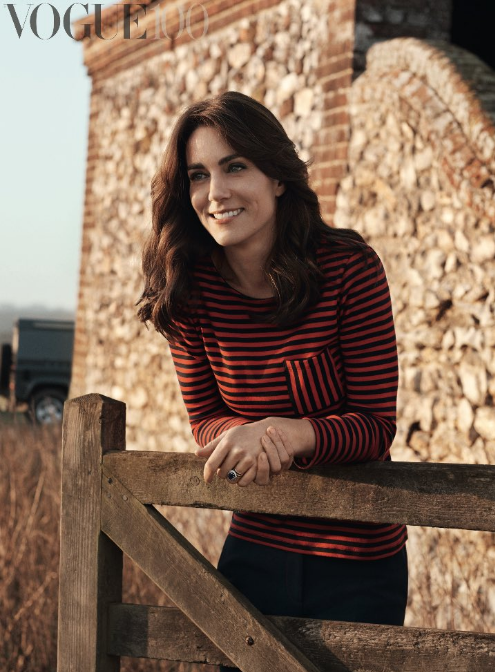 Kate’s luxurious long brown hair is blown out and cascades around her shoulders. As per the request of the Duchess, she retained her longtime hair stylist Amanda Cook Tucker to achieve her classic look. Ms. Cook Tucker is the same hairdresser who has styled Kate’s hair after the births of her two children. In addition, she traveled with the royal family when the Duke and Duchess visited the United States in 2014. Amanda styled Kate’s hair, so the Duchess could wear her signature hairstyle whilst making official appearances and touring the many wonders of New York City.

A Wardrobe fit for a Duchess, but available to Fashion Lovers everywhere

Befitting her refreshing personality, Kate asked that her photo shoot feature a more casual aesthetic instead of typically glamorous shots. To achieve this, the magazine and the Duchess of Cambridge worked together to choose a wardrobe of “country chic” items from a variety of sources. Leaning against a gate on the property, Kate is seen wearing a red and black striped top by Petit Bateau that is sold at retail for only £35. She completes her look with a pair of sturdy boot cut pants in a shade of Navy from Burberry that sell for £695.

Perhaps it is the cover shot that truly describes Kate’s practical fashion sense and deep abiding love of the outdoors. The Duchess wears a white shirt made from jacquard fabric, along with a traditional trench coat to ward off the late afternoon chill. Also from Burberry, these items can be found and purchased online for a total of £293. For those fashion seeking readers who wish to own her jaunty green hat, it was found by the Vogue style team at the Beyond Retro vintage shop.

The Duchess models several more looks that define her personality and shining spirit. In one photograph, she wears a boot known as the “Toulon” from Dune London. This navy blue footwear is available in stores for just under £160. She pairs these with overalls from “Lolita Cutie” that are sold by AGjeans for £208. Another shot features Kate relaxing in a pair of palazzo pants that she models with the additional of an added belt. This outfit can be purchased from “7 For All Mankind” for under £195.

Home based Surroundings that the Duchess knows well

The weather cooperated during the day long photo shoot, allowing the crew to incorporate the bright sunlight and native greenery. Clearly within sight in the photos are a number of small farm buildings on the property, which were used as a dressing room and for the needs of the Vogue photo crew. Royal watchers will enjoy the sight of the Landrover Defender driven by the Duchess to the actual photo shoot. This comes as no surprise to those who know Kate, as she continues to maintain as much of a down to earth lifestyle as she can in her newfound royal position.

When not in residence at Kensingston Palace, the Duke and Duchess of Cambridge reside in Norfolk at their Anmer Hall country house. It is here that they have chosen to raise their two children, Prince George and Princess Charlotte. As a family they enjoy the peacefulness of the area, something that comes across warmly in each of the photographs.