The cinematic worthy Cornwall serves as the 18th century backdrop for Winston Graham’s “Poldark,” which is being adapted for the screen by Debbie Horfield.

Tuning in to watch the drama unfold, viewers have the opportunity to get a glimpse of the spectacular Porthgwarra, Gunwalloe and Charlestown coastal landscapes. Wind blown grass, rolling sand dunes, dramatic cliffs and the raw power of the ocean are some of the features that set the atmosphere for this period piece that plays out in an era of economic contrasts and uncertainty. 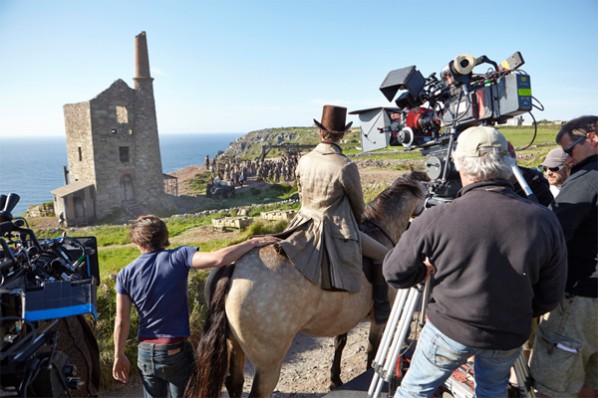 Poldark will undoubtedly do for Cornwall what Downtown Abbey did for Highclere Castle. Positive response to the BBC One show will surely influence holidaymakers to venture to the rugged southwest shorelines of Cornwall where filming took place last summer. Considered an Area of Outstanding Natural Beauty, the historic communities play well into the storyline of the eight-part series. With the last show from the first novel airing at the end of April, there is plenty of time to make arrangements to visit the filming locations this spring.

Today, the quaint fishing cove features traditional cottages on the eastern edge of Mounts Bay. The community was the first in Cornwall to be mentioned in the Domesday Book, as the King’s Winnianton Manor dominated the hundred of Kerrier. At the time, the southern Lizard peninsula village had meadows, pasture and woodland along with little more than 100 residents.

In later years, the area was renowned for smuggling and shipwrecks. Somewhere beneath local waters the St. Anthony went down in 1526 with a cargo of gold and silver for the King of Portugal. In 1779, filled with a cargo of wine, the Slando Welvern met a similar fate. Take a diving excursion and see one of the many wrecks firsthand. One of the charming features of the farming community remains the local parish church. Originally constructed in the 13th century, the stone St. Winwaloe Church lies nestled in the cliffside. Though rebuilt in the 15th century, the rear tower and Norman font from the first church continue standing.

The coastal village lies on the western tip of the peninsula. Highlights of the location, which was founded between Land’s End and Porthcumo include the scenic South West Coast Path. While exploring the destination, guests may visit the local cafe and shop. The owner allows respectful guests access to the cove and slipway. The treasured private cove is a coveted swimming area. The bottom of the slipway boasts an old tunnel created by local tin miners, an occupation that has a dominant role in Poldark. Today, the opening provides farmers with beach access in order to harvest seaweed for fertiliser. Another tunnel leads to the sea and was once used by fishermen as a storehouse for shellfish.

During the late 18th century, the south central coastal location was known as West Polmear and contained but a few fishing cottages and cellars where the local catch was processed. The entire village had nine anglers and their families. Charles Rashleigh moved to the area and began construction on the harbour and dock shortly thereafter. The small port and mining operations bolstered the local economy. Tons of copper ore were exported from the local harbour.

Local fishermen continue using the harbour that is currently owned by Square Sail. The company manages a small fleet of tall ships that offer tours during the summer months and remain docked in the port. The village also features the Charlestown Shipwreck, Rescue and Heritage Center, which provides an insightful look at maritime history. Guests might have an ale at the Rashleigh Arms brewery, stay at the Pier House Hotel and enjoy a meal a the Bosun’s Diner. In addition to the beautiful coastal views, the show’s producers also probably were attracted to the area, which once served as an authentic mining community. Located around the village are the old Crinnis Hill Mine, the Charlestown United Mines and the South Polmear Mine. By the first quarter of the 19th century, the profitable operations employed 700 men, women and children. The community is a prime location to learn about the industry that dates back to ancient times.

Long before the current Poldark series, the coastal landscape attracted other film makers. In 2008, Tim Burton used Charlestown for scenes in “Alice in Wonderland.” The Doctor Who episode entitled, ” The Curse of the Black Spot” was filmed here in 2011. During the spring of 2012, the landscape appealed to filmmakers who filmed “The Adventure: The Curse of the Midas Box” here.

Though not related to the BBC show, the Poldark Mine in the beautiful Wendron Valley remains a World Heritage Site and once served as an important industrial location. Mining alluvial tin was first documented at the historic destination in 1493 and work continued into the 19th century. Today, the appealing surroundings include gardens and the chance to tour a complete underground mine. Learn about the fascinating history of the industry, and get a glimpse of a challenging day in the life of a miner. The site also features a number of craft workshops operated by local artisans. Watch candle makers, ceramic painters, jewellers and pottery makers hard at their craft. See the results of their time-honoured labors.

The BBC has just released a guide to locations : www.bbc.co.uk/poldarks-cornwall-locations Cornwall Poldark Map We have created a Google Map of location in Cornwall, use it to create your own journey

5th May 2015 | Posted by: Shootfactory
SHARE WITH YOUR FRIENDS:
Category:  Film Location