The new series of Peaky Blinders premiered Wednesday night on BBC, bringing the dapper Birmingham bad-boys (and girls) back to bless television screens for the fourth time. Set in the late 19th and early 20th centuries – the coming-of-age of the Industrial Revolution – most of the scenes for both Birmingham and London have been filmed in places like Liverpool and Manchester, where factories and mills dating to that time period abound.

Churches, halls, and museums have also served as filming locations throughout the series, with some new ones offering clues as to what this Autumn has in store. 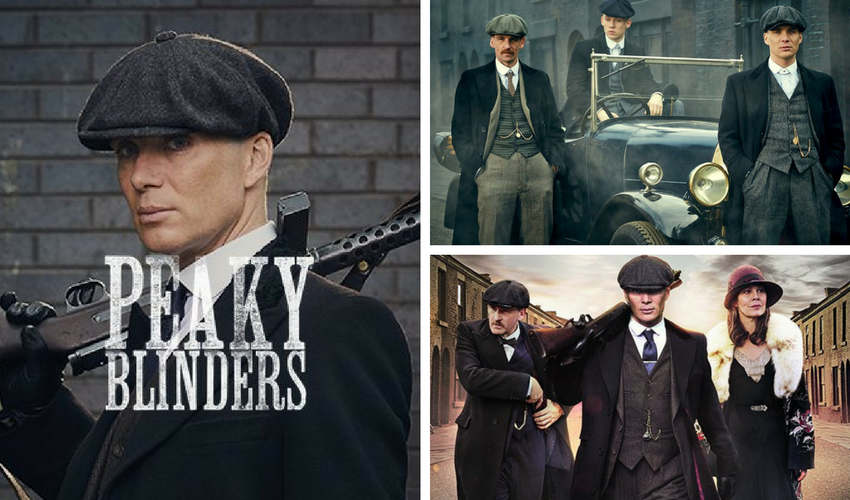 The beach at Freshfield, marked by sweeping sand dunes and exposed rock formations, is part of a nature reserve managed by the National Trust; the town itself grew up around the railway station for which it was named, built in 1854. According to BT.com, actors Cillian Murphy (Tommy Shelby) and Tom Hardy (Alfie Solomons) were spotted filming at the Merseyside County shore, perhaps taking advantage of the town’s rich history and late 19th-century architecture. The Grade II-listed Formby Hall was modernized in 1896 before falling into disrepair.

BT also reports sightings of cast and crew in Toxteth, an inner-city area in Liverpool. This was confirmed in the Liverpool Echo, which adds there have been some props set up around the town, such as old factory logos and storefronts on the terraced, abandoned streets of the Industrial-era working class neighbourhood. Built in the late 1800’s, the slums were cleared after being declared “unfit for habitation.” This particular block was purchased by Ringo Starr to protect his family home.

Port Sunlight on the Wirral Peninsula

Used as Aunt Polly’s house in Sutton Coldfield, this model industrial factory and garden village contains 900 Grade II listed buildings on 56-acres in northwestern Merseyside. Thirty different architects built its 800 houses, an art gallery, schools, a cottage hospital, concert hall, swimming pool, church, and temperance hotel, all to house the soap-making works and labourers for the Lever Brothers in 1888. The buildings feature the half-timbering popular then, plus carved woodwork and masonry, pargetting, leaded glazed patterns, and moulded and twisted chimneys.

Stanley Dock on the River Mersey

Stanley Dock is another Merseyside location which has been used in past series of the show to imitate WWI-era Birmingham. Opened in 1848 and 1901 respectively, the dock and adjoining landmark, Jesse Hartely’s tobacco warehouse, are part of Liverpool’s UNESCO World Heritage waterfront skyline. Currently being restored and converted into luxury apartment homes, the dock is a Grade II listed historical building and part of the “largest and most complete system of historic docks anywhere in the world,” according to its website.

Located in Rochdale, Greater Manchester, this Victorian town hall building is a Gothic and Flemish style architectural wonder. Producers would not reveal anything about which Peaky scenes were being filmed, but onlookers at the closed set in April of this year reported that it could be a wedding. An insider also told the Manchester Evening News that the hall’s “period features and luxurious interiors lend themselves perfectly to our filming needs.” Built in 1871, it features intricate carvings, mosaic tile floors, a grand staircase, and vaulted ceilings.

Located on Quay Street in Manchester, Granada Studios operated from 1956 to 2013, and since closure has been used as an event venue while some buildings are being renovated to honor the site’s cultural heritage. The studio was built over and around pieces of Manchester’s architectural history; as documented in an online photo exhibition, notable features include a 1930’s style cinema, a forgotten underground canal, and an 1867 bonded warehouse once used to offload cargo from the trains that pulled into the building’s ground floor.

The industrial town in Greater Manchester has been used regularly throughout the series to film the scenes that take place in London. Despite much of London’s cityscape dating to the Industrial period and earlier, much of it, like Birmingham, was damaged during WWII; in addition, modern skyscrapers have sprung up in recent decades, and crowded streets make filming difficult in the city. Le Mans Crescent resembles the iconic curving avenues like those off Leicester Square and Picadilly Circus (without the flashing club lights), and is one of Bolton’s 26 listed conservation areas, making it a perfect stand-in.

As reported by the Manchester Evening News, the Grade II listed former swimming baths in the inner-city Manchester area of Longsight were used in series 2 for filming the horse races. One of the pools was transformed into an auction ring by laying sawdust on the floor. Opened in 1906, the building was closed and near deteriorating in the 1990’s. Restoration efforts were eventually completed in 2008. Its multi-coloured brickwork and terracotta façade housed public pools and private baths, all ornamented with glazed tiles and stained-glass windows.

Arley Hall in Northwitch, Cheshire is a stately country house and gardens which was used as the filming location for Tommy’s lavish estate in series 3. Dating from the 1400’s, it has been in the same family for 550 years, but was largely rebuilt between 1832 and 1845 in the Jacobethan style and half-timber and local red sandstone the era is known for. The interior features French stained-glass windows, panelled walls, oak doorways, and an Elizabethan grand staircase. The Grade II listed historical site is a mix of the old and new, reflecting the rapid change taking place in England in the late 19th Century.

This large industrial-era town and port is one of the few to have retained much of its manufacturing industries, including an oil refinery, chemical works, and the Vauxhall Motors automobile factory. Cheshire and its environs are themselves rich in historical architecture, including roman walls and a thousand-year-old cathedral, but is best known for its Industrial Revolution heritage. Ellesmere Port became a civil parish in 1911 to spur the local economy, and was used in previous series of Peaky Blinders as the set for Camden Lock.

This open-air museum in Dudley, West Midlands was built to resemble a 19th century village in celebration of the Black Country’s heritage as the “first industrial landscape anywhere in the world,” according to the museum’s website. According to BT, the venue was featured in all of the previous three series, and was used again to film scenes for the upcoming series. Just ten and a half miles northwest of Birmingham, the living museum is comprised of 26 acres of reclaimed industrial land and features rebuilt industrial shops and houses relocated from the surrounding area.

The upcoming series is reportedly a return to the show’s roots, focusing on the relationship between the Shelby family members after Tommy’s apparent betrayal at the end of series 3. A mysterious letter arrives that forces the family back together, if only for their own survival. High-speed pursuits, gun fights, and explosions are also expected, based on insider information provided to the Manchester Evening News.