Movie shoots are interesting to passing drivers and pedestrians, even if they do not get angry about being delayed, there is a chance that they could become distracted and can cause a major roadside accident.

This is because they often end up watching how a movie is filmed instead of paying attention to where they are going. 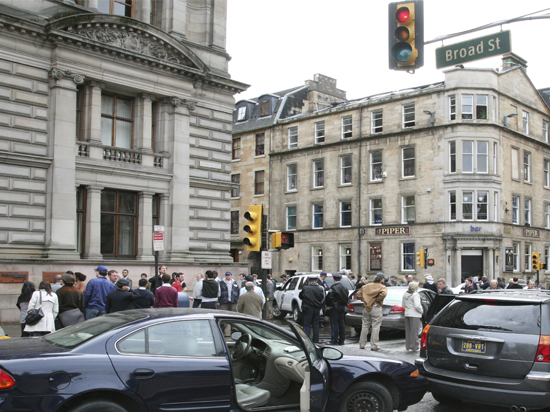 It is important for film companies to manage public traffic while they are filming on location. Even though they are not always technically or legally liable, they are morally responsible if their shoot contributes to an accident. To prevent this from becoming a reality, it is imperative for a filming crew to follow some important tips.

It is important for a filming crew to alert the authorities of their plans. Aside from that, some parts of the shoot may need special permission and licenses. The appropriate filming and location agencies will be able to provide advice to help make a shoot safer and more effective. Traffic control with the assistance of the local constabulary is a must for all conditions. Aside from reducing the film crew’s liability in case an accident happens, people are more likely to stop for a uniformed officer. Also, these law enforcement professionals are used to this type of traffic control. Always bear in mind that a lot of regular people lose what good sense they have around a movie shoot.

Determine the Impact of the Shoot on Local Businesses, Residents and the Road Network

Public filming should always be timed in order to avoid clashing with peak traffic. Aside from that, film shoots should be planned to make sure that access to businesses, buildings and local residents is not compromised. Because of this, the crew should consult with the Highway Agency when their shoot is near a motorway, a trunk road or any sort of junction. Film producers are strongly encouraged to plan their shoot in order to avoid people leaving or arriving a peak traffic times. Additionally, it is important for them to consult with local passenger transport operators as their services may be affected by the closure. People should also never forget to make contingency plans for emergency access in case a traffic accident happens.

Always Assess the Road to Be Used for the Shoot

It is also important for the film crew to assess the stretch of the road where their film will be shot. This will help determine if there are side roads and driveways that could allow passage for an unexpected vehicle on a road where they are shooting. Because of this, it is very important for people to leave someone on every drive way and small side road. This will prevent any vehicle from getting on the road that they are currently using. Aside from that, they should consider the background, side roads, smoothness, turnarounds and noise when choosing the road where they will shoot their film. Two or more takes are possible if producers have enough time. Additionally, it usually takes more time to film on roads that have turnarounds. This is something very important that film crews should bear in mind when planning a shoot in a public location.

Communication is very important when managing traffic in a public filming location. Because of this, it is important for the film crew to equip the traffic management personnel with radios. Usually, police radios are the most reliable. If there is more than a single go and stop point, it is critical that the lead traffic management operative is supplied with two radios. The first one will be used to speak with other traffic management workers while the other one will be used to communicate with the first assistant director. It is also vital for the crew to list the mobile contact numbers of the operatives on a call sheet in case they cannot be reached. If long distances are expected between traffic management workers, it is best to use a ten watt radio with a linear amplifier and magnetic antennae. There are parts of the highway that make five or two watt units almost useless.

Along with traffic management personnel, it is also important for people to use signs to help divert traffic. Sign are to be used as part of a diversion route. This will help people get to another portion of the road where there is less traffic. Once the signs to be used in the filming location have been determined, it is important for people to make a sign schedule. This schedule should include the location of each traffic sign along with the road’s name. At the same time, the type of each sign should be included. People should also not forget to list the types of signs and the colours to be used. They should also list the time, date and sequence of removal or placement. Aside from that, they should also list the competency details of the individuals who are tasked with removing, maintaining and placing the signs. For a much larger public film location shoot, the film crew may consider variable message signs that can be hired from a traffic management company.

These signs provide higher impact when it is supported by the right software. This can allow people to display directional messages in addition to updating them easily and quickly from any device that has access to the Internet. Their impact and efficient communication capacity means that they can be easily deployed in fewer numbers than static traffic signs. Aside from that, message signs display messages utilizing a wide variety of colours that make people pay attention. This allows driers to interpret instructions with the greatest speed. This equipment is quite useful to provide motorists with up to date information about the traffic. It is also quite useful when unplanned accidents adversely affect the traffic in the vicinity of the filming location.

If one of the traffic management operatives is stationed near a highway, it is important that they wear high visibility waistcoats that conform to standard EN 471. High visibility waistcoats enable traffic management personnel to contrast with the work zone’s background. It also makes them clearly recognizable to motorists at any given angle. These waistcoats also have fluorescent properties that provide visibility during the day. At the same time, they have a retro-reflective material that reflects back light to its source at night. Car operators cannot recognize a traffic management worker who is wearing non-enhanced or inadequate visibility clothing in sufficient time to avoid an accident. Always bear in mind that a traffic management operative cannot control the number of vehicles that are passing by if he or she cannot be seen in the first place.

When the shoot is going to be conducted at night, it is important for the film crew to use additional lights on motorways. This will ensure that stop points are clearly visible. Variable message signs can also be used because they utilize a wide range of colours that inform people if stop points are up ahead. Aside from that, it is important to alter traffic management controls depending on the amount of daylight visible. This will help provide the necessary adjustments to control the flow of traffic more easily.