Images are powerful tools that highlight stories that do not get or gain sufficient traction, and to amplify a wide variety of perspectives. They expose neglected or unseen realities, which is why they make the best in documentary and editorial photography.

The most common term used in this field is documentary photography. While few have little to no knowledge about what it means, others think it is a synonym for photojournalism. However, the term refers to capturing photos by following a single story or topic in-depth over time.

A good example is how documentary photography can capture the public’s eye and mobilise them around pressing social and human right issues. This type of photography deepens our understanding on various subjects like lost culture, stories of injustices, and how people interact with the environment around them. At the same time, it makes people create an emotional connection with the subjects, and few photographers can evoke them. 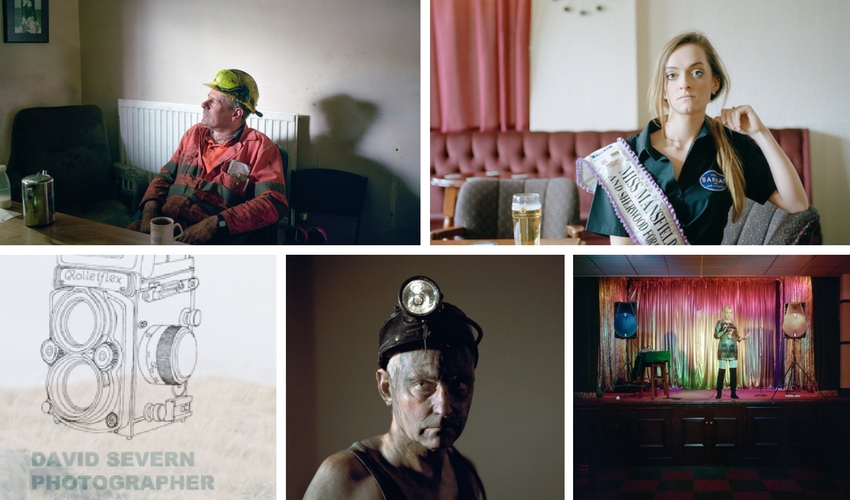 Nevertheless, nobody understands the art of capturing the working class culture and its environs, both historically and in the present time like David Severn. He is a documentary and editorial photographer whose work has garnered him several awards.

Severn’s photographs have nationally and internationally been exhibited. In 2015, during an international competition open to documentary photographers, he was the recipient of the Magnum Photos 30 under 30 awards. The award features photographers under the age of thirty covering social issues. His most recent award was the 2016 Magenta Flash Forward. He packs a wealth of experience from working with notable editorial clients such as the Financial Times, Le Monde, The Guardian, The New York Times and MONOCLE.

One photograph that features a singer, Jo Mansfield, performing at Manfield Woodhouse Ex-Servicemen’s Club has been selected for Portrait of Britain 2017. The photograph is a part of his series, Thanks Maggie. The series is a documentary of landscapes and communities surrounding Nottinghamshire and Derbyshire coalfields thirty years since the miner’s strike in 1984 to 1985. The portrait, as part of BJP’s Portrait of Britain 2017, will be exhibited across the UK in partnership with Nikon and JCDecaux.

The Story Behind the Jo Mansfield Portrait

Selected from his long-term project, Thanks Maggie, Severn’s selected photograph, which features the singer on Working Men’s Club Circuit, captures the reminiscent culture of Britain’s industrial communities decades ago. During this period, Miner’s Welfare and Working Men’s Clubs were the places to go for thrilling entertainment. According to Severn, these were the venues big stars like Shirley Bassey, and Tom Jones affirmed their place in the entertainment world. 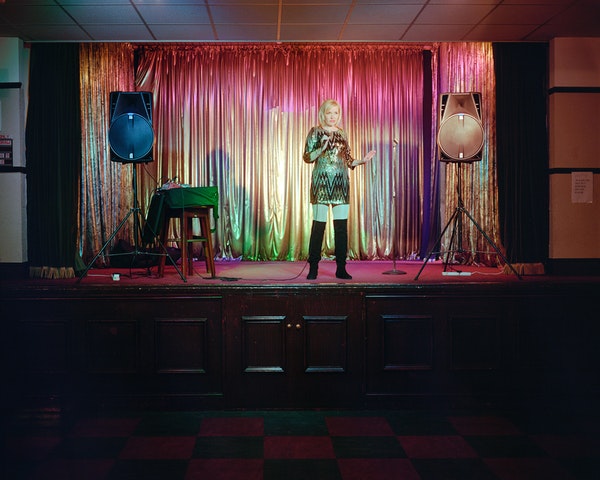 As a son of an ex-mineworker, Severn has a close connection to the venues. He says his father himself frequents the clubs as a performer of Elvis Presley tribute acts. He was keen to capture portraits in the surviving clubs of Mansfield in a mining town that made part of his childhood. His desire to photograph the social life of the clubs and the faded beauty of their interiors saw the conception of Jo Mansfield’s picture.

Severn says that most of these venues, although much loved, are gradually declining at the same time the audience is dwindling. However, few individuals still relate to the clubs as the popular meeting place and affordable night. Part of successful documentary making is not missing out on capturing such aspects of life that are rapidly disappearing. They make a rich culture that conjures happy and forgotten memories.

Why Documentary and Editorial Photography?

According to Severn, photography is a democratic medium, and it enables individuals to explore endless possibilities and experiments. It allows you to exercise and explore creativity in unimaginable ways. Nonetheless, photographs let you tell subtle stories and document photos that capture unique lifestyles.

He also reiterates that documentary photography is a great way of celebrating the unsung heroes. Most of his photos capture subjects he knows and identifies with. For example, he remembers the devastation of people and the villages in the mining town he grew up in during the colliery closures in 1980’s and 90’s. He says that despite unemployment and the accompanying social problems, the men and women he encountered growing up were nothing short of heroic. His work is a celebration of their culture as well as their lives. It is also a great way of depicting their plight. 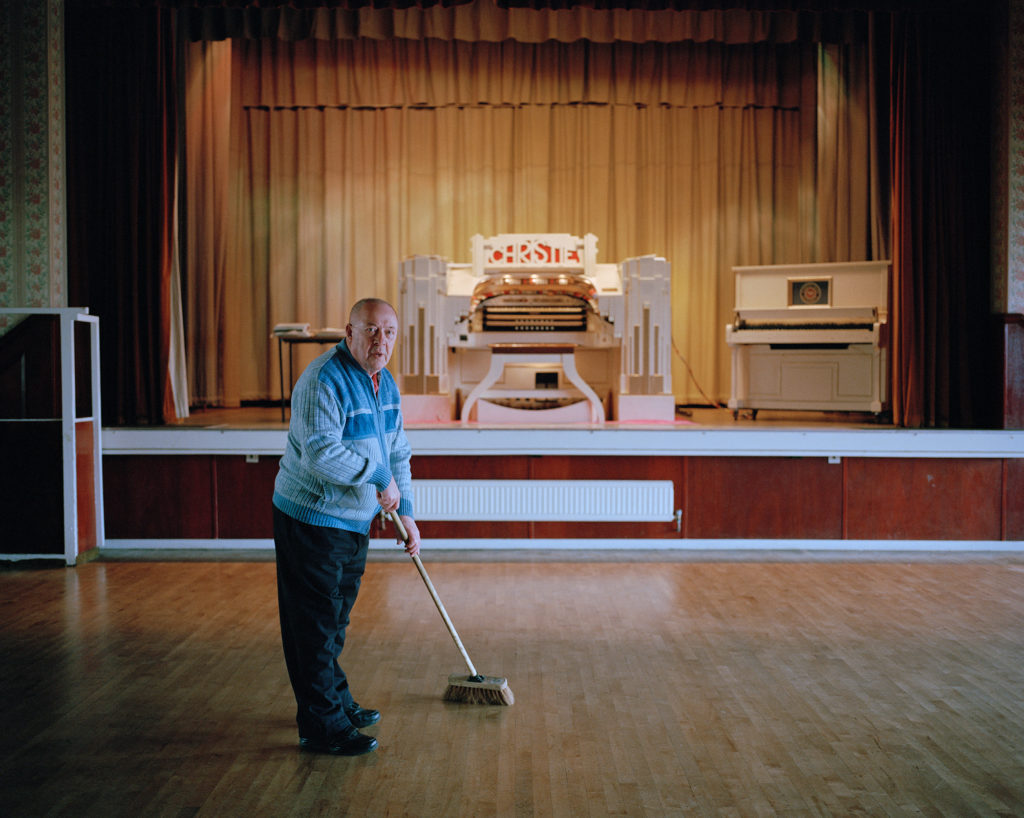 Severn also used the photographs to depict lives of young people coming of age amidst a whole new landscape after the long-dead industrial culture. His photos reflect upon their hopes, their prospects as well as their vulnerabilities and strengths. This way, people can empathize and connect on an emotional level with the photographs.

Advice on Getting into Documentary and Editorial Photography

Severn’s advice on getting into portrait photography and for those wishing to make pictures that are exceptional is simple. There are no rules. He believes that pursuing your dream on portrait photography is the first step that can take you to places you couldn’t imagine. It will allow you to meet new and exciting people wherever you go. In his opinion, the simple way to begin the journey of portrait photography is by photographing people you know before stepping out of the comfort zone and asking a stranger if you can photograph their portrait.

Often, the most exceptional pictures captured are those that people can relate with. Severn says that he is drawn to taking pictures of people who remind him of characters he encountered while growing up in Mansfield, his hometown. He has a firm conviction that a sense of familiarity makes people connect emotionally, and this is what often makes for the best portraits. As a photographer, you should try to take portrait photographs of places that people have an emotional connection with.

Regarding photographs that most photographers submit to Portrait of Britain, his advice is to choose a portrait photo that captures and represents a better part of the British culture that not only is familiar to you, but may surprise many folks and leave them asking lots of questions.

What Constitutes a Compelling Portrait?

Not all types of pictures are compelling. For your photo to be selected for an exhibition, either nationally or internationally, is no cup of tea. But, what makes for a compelling portrait photograph? Severn says that a good portrait depends on the connection between the photographer and the subject. Although these moments do not last long, they can be life-affirming and meaningful. Everything that should come into place for the photo to be exceptional include expression, the light quality, the composition and the environment. All these factors strive to evoke an emotional response from the portrait viewer.

Regarding light quality, there are unlimited possibilities to consider for a good portrait. Side lighting, for example, may be used to create a mood or evoke an emotion. You may also backlight, or silhouette your subject to hide or emphasize on the features. On the same note, for an exceptional portrait photo, move or take pictures of the subject in an environment that tells a story.

Make the Most Out of Memorable Experiences

David Severn has a particular memory that he holds and terms crazy. When he was working on his documentary series, Thanks Maggie, he says he was introduced to a one Stephen, an ex-miner and a big fan of Rock n’ Roll. This fellow had an old Jukebox, and as Severn entered a house full of Elvis Presley memorabilia to take Stephen’s portrait, they decided to play something on the old machine. He remembers the windows rattling as music blasted off the broken volume control Jukebox.

The point is, don’t forget to have fun while you shoot portraits. Establish trust with your subject as this will create a better connection between the two of you. You will be amazed at the kind of an amazing portrait you have taken. Similarly, such memories, years to come, will tell of a rich culture people once had. For example, many years to come, people will have no idea what a jukebox was, let alone the purpose it served.

Role of Portrait of Britain in Documentary and Editorial Photography

The Portrait of Britain is UK’s number one photography exhibition. It showcases works of selected photographers on many digital screens all over the country. To Severn, everything about it is great. That the advertising is everywhere is striking and overwhelming especially when that space has been co-opted for the exhibition of art. He believes that documentary photography is a democratic way of letting people connect with what affects them and that the Portrait of Britain is emphasizing its importance.

Career in Documentary and Editorial Photography

The greatest sense of fulfillment from doing portrait photography is seeing projects come together. Moreover, it is such a privilege for your works to be noted and chosen for an award. Choosing to pursue a career in the field takes lots of commitment. The goal is to strive to tell stories, invoke feelings and play with reality. Make use of available resources and follow a line of a documentary that most people can relate to. Focus on people’s culture, the changing landscape, and people’s relationships.