A Tour of England’s Architectural History

How far back can the history of architecture be traced throughout the British Isles? It’s a longer timeline than you may first imagine, since myriad generations of homo sapiens occupied and decorated caves when the isles were connected to mainland Europe.

As ice ages came and went, our homeland emerged as an island empire, and according to skeletal remains uncovered in Norfolk in 2013, the cleverest of early men found ways to craft shelters as early as 800,000 years ago here in the U.K.

Unfortunately, there’s a huge gap in artifacts and information needed to fill in the architectural blanks, but fortunately, the conquest of the British Isles by Rome around 50 BC elevated existing building styles thanks to the influence of Roman architects. By the time the Normans invaded around AD 1066, an amalgamation of Roman and Scandinavian styling influenced the look of houses, cathedrals, castles and churches. Some of these remain standing, albeit as ruins, creating a history of architecture best appreciated for all that it was, and consequently, all it became.

According to “The Guardian’s” Jonathan Glancey, “buildings can be read like books.” We rather like that analogy, because as one digs back in time and compares lifestyles and circumstances, there are stories to be told that reflect style evolution. With each new era, clues to economic health, cultural change and the use of building materials reveal themselves, so whether you’re fascinated by design history or you plan to invest in vintage property, it’s prudent to learn as much as possible about this topic,even if we only use is to add to the conversation over tea, cocktails or both!

The Normans brought with them the ways of the north, literally, because most descended from Scandinavian Norseman with deep roots in climates that called for serious protection against arctic cold. Thick walls, huge columns (for aesthetic and structural reasons), small windows and decorative arches remain hallmarks of Norman housing styles, and this society elevated stone vaulting to an art.

Cathedrals and castles built during this time period throughout the British Isles lasted hundreds of years. Some still survive thanks to solid construction methods, and the decorative styles that distinguish 12th Century Norman architecture from other types are mainly found within this period’s stone-rich structures. Thanks to architectural renderings, we still have a record of homes built of other organic materials during this era.

You don’t have to know the first names of all of Henry VIII’s wives to be able to pick out a Tudor-style house from neighbouring dwellings. The Tudor architectural movement spanned late Medieval and Gothic periods that lasted from 1485 to 1603. International influences pervaded all manner of buildings as architects borrowed from French Renaissance, Italianate and even Dutch housing trends to turn the most ordinary of dwellings into exotic-looking homes.

The Gothic arch was given new life and re-named the Tudor arch. Other popular architectural features of the day included straight-headed, mullioned windows, the lavish use of hood moulding and decorative brick. Tall chimneys towered over steep rooftop gables as architects sought to bring “old world” touches to contemporary dwellings, gathering places, churches and estates.

Because classical architecture remained a popular building style, it was easy to incorporate influences from other lands, thus England’s 17th century architectural movement known as the Stuart era became a study in uniformity. Until now, you might say that British architecture suffered from style overload. All of the fretwork, latticework, exaggeration and embellishment of the Gothic period suddenly went out of favour. In its place was a movement that stressed elegance and simplicity.

But tragedy struck in 1666 with London’s Great Fire and only the most stalwart of stone and brick construction stood up to the blaze. The iconic British architect, Christopher Wren, was tasked with replacing buildings, but his master plan for re-building the entire city was rejected by city planners for myriad reasons, so once again, English builders turned to Europe for inspiration, which is how the nation slid effortlessly into its own version of the Baroque movement.

Sticklers for detail will want to know that the Georgian architectural period lasted only 140 years, but it managed to create a uniquely distinct profile on the UK landscape. Home silhouettes from this period relied upon early Roman and Greek influence to define overall Georgian style, so if you can imagine a Roman senator or Greek runner entering a front door, you’re well on your way to identifying housing created in that style.

Thank George I for the name Georgian and Italian architect Andrea Palladio for innovating this return to classicism and neoclassicism. It’s best represented in uniform, symmetrical London townhouses bedecked with over-the-top pilasters, moldings and pediments over doors. Confirm your style hunch by spotting interiors featuring Chippendale furnishings, tranquil colours palattes and perhaps a Gainsborough masterwork or two gracing the walls.

The Victorian architectural era lasted only around 50 years and is, in many ways, a reflection of the dour and formal society that surrounded the reign of Queen Victoria. Some experts say that the style emerged from the introduction of bay windows that prompted architects to re-draw residential floor plans in the shapes of rectangular grids. If you find yourself in a home featuring an entryway on one side rather than the middle, this configuration adds credence to your guess that you’ve identified a Victorian.

But, not so fast. Despite a 50-year style span, Victorian architecture somehow managed to assume three distinct schools of design, so to determine which type of Victorian you encounter, apply these guidelines:

Georgians reflect architectural trends that are thousands of years old–and the introduction of bay windows influenced Victorian design during its half-century of influence–but when it comes to a profound number of dramatic changes in building, construction and design, the most meteoric architectural period of all is the Edwardian Era. It lasted a scant 14 years, yet it represented something of a revolution in architectural change that produced signature features like lower ceilings, more ornamentation, leaded glass doors plus a preponderance of red brick. All of this identified the U.K. architectural metamorphosis that came to dominate new construction between the years 1900 to 1914. 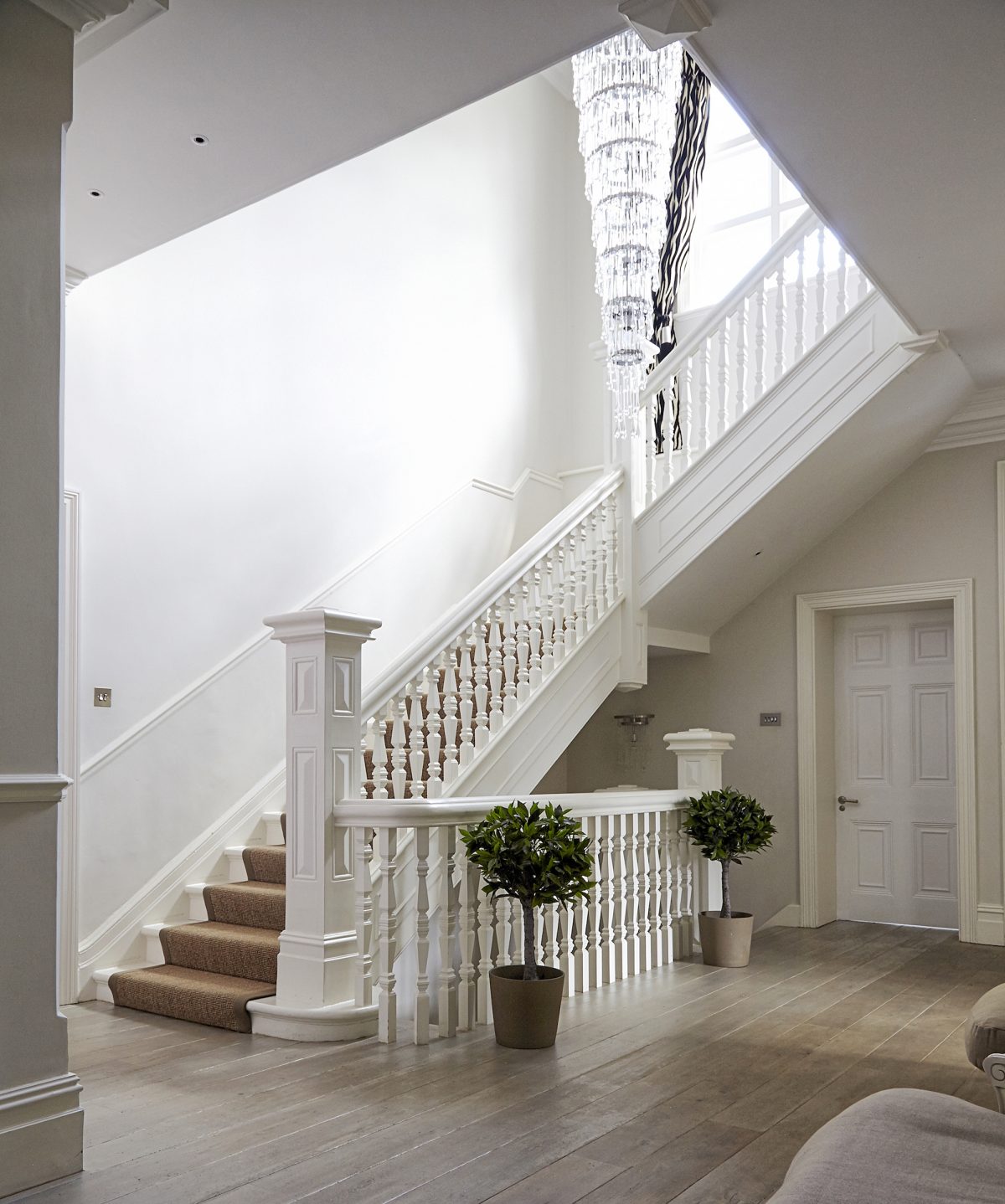 What drove the Edwardian housing boom? Increased population and economic upturns plus affordable mortgages for a growing middle class. New railway lines sent families to the suburbs where affordable property promoted home ownership. Edwardian dwellings weren’t as stately or lavish as were the Victorians, so builders required fewer raw materials. Cellars and second floors disappeared in a flourish of social change as house staff disappeared or diminished in number. To compensate for scale, Edwardian homes became centerpieces for flamboyant external facade trim and lavish gardens edged with porches, verandas and balconies.

The Arts and Crafts Era

Material shortages kept pace with England’s war effort and offered architects opportunities to figure out how to design on a smaller scale. Pre- and post-WWI buildings relied upon mass production to cut corners and still meet the needs of home buyers who came through the war in good financial shape. Was this a new movement? Not exactly. Architects experimented with this style in the 1880s when Victoriana was in vogue, but Arts and Crafts didn’t flower until the 1930s when it borrowed liberally from a wide range of previous eras: bay windows, Tudor beams, tall chimneys, pitched roofs and formal gardens.

These affordable homes drove class distinction into the stratosphere as landed gentry clung to their sprawling estates—-albeit with fewer servants to handle household responsibilities. Upper class society labeled mass-produced architecture “an Orwellian line of prison cells,” according to purists who took issue with the trend. Today, the Royal Institute of British Architects point to the Arts and Crafts movement as a natural architectural evolution that reflected a nation becoming more egalitarian. In recent years, Arts and Crafts-style buildings have become distinguished members of England’s building history.

Britain’s adaptation to war-time economies was again tested, particularly in London which survived the onslaught of bombs that was the blitz. A devotion to bulldozing in urban areas cleared the way for new construction that didn’t always follow the aesthetic of previous periods. High-tech architecture proved a great boon to post-WWII austerity measures and dwelling sizes continued to shrink in size.

Of course, plenty of the old Victorians, Edwardians and even Arts and Crafts homes stuck around to provide continuity between the ages and stages of English architecture, and if only one overriding trend were to be named, it would be the popularity of multi-family dwellings in the form of flats, apartments, coach houses and townhouses built on strips of land that too often sacrificed gardens and grass to maximize interior space.

Structurally, the late 20th and early 21st centuries have introduced practices and systems that make today’s homes more efficient and comply with the nation’s Climate Change Act. Insulation, ventilation and recycling schemes reflect the propensity for using fewer resources and relying on sustainable technology to do more with less, so it wouldn’t be incorrect to say that today’s architectural trends are projected to remain focused on energy efficiency and clever allotments of interior space to give today’s busy homeowner less to worry about and more in which to take pride!